Samsung emphasizes innovation and research and development (R&D) because it is essential to its business. In order to infuse a culture of global and local innovation, the Samsung Research Institute has a number of R&D centers strategically spread across the globe, including three in India: Bangalore, Delhi and Noida. Samsung R&D Bangalore is Samsung Electronics’ largest overseas R&D center.

The use of lithium-ion (Li-ion) batteries has made the electric vehicle a reality, so we could see the widespread acceptance of electric mobility in the not-too-distant future. However, there have been more than a few incidents of Li-ion batteries in electric vehicles catching fire due to faulty thermal management systems (TMS) or rough-driving abuse. This underscores the importance of finding new methods for effectively and accurately designing TMS that control temperature and optimize the performance of Li-ion batteries.

To address these challenges, the Samsung R&D Institute in Bangalore, India, in collaboration with the Samsung Advanced Institute of Technology, Korea, recently presented a novel, liquid-coolant-based TMS for large Li-ion battery packs. They constructed a coupled 3D electrochemical/ thermal model of the proposed battery pack. The simulation revealed that contact resistance had the greatest impact on the pack’s thermal performance.

The role of computational fluid dynamics

Considering the three-dimensional nature of the flow around the cells in a battery pack and the spatial variance involved in heat generation, the practice of simulating battery packs using computational fluid dynamics (CFD) has evolved to become an effective design and optimization tool to address thermal management problems.

For the large battery packs that operate at the high discharge rates typically used in electric vehicles (EVs) and hybrid electric vehicles (HEVs), CFD studies have shown that liquid cooling is more effective than air cooling, enabling the design of more compact and efficient batteries.

In the Li-ion battery pack presented in figure 1, a commercially available 18,650- cell Li-NCA/C battery was used. Elements made of highly conductive metal transferred heat from the cylindrical cells to the coolant channel and, finally, to the coolant liquid (in this case, water). A test pack of 30 cells was fabricated, with six cells in series and five cells in parallel (see figure 1).

A complete characterization of heat generation was obtained by constructing a 3D CFD-based electrochemical model of the battery that could be validated against experimental results, then used to simulate and evaluate the performance of the TMS under various operating conditions. 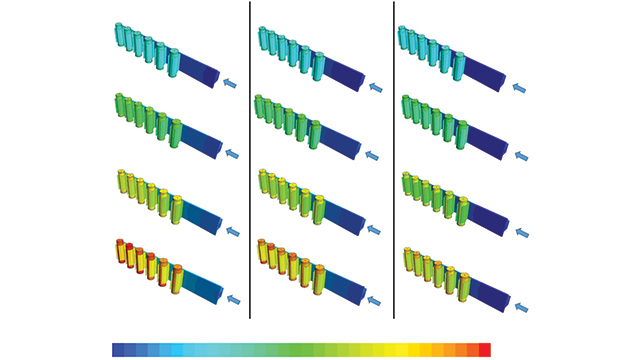 In electric vehicles, power for operating the TMS comes from energy extracted from the battery. Reducing the energy requirement for the TMS reduces its drain on the battery, thereby optimizing coolant flow rate, which is essential. The Simcenter STAR-CCM+ model revealed that more heat is stored in the battery pack in lower coolant flow velocity conditions, indicating that at lower flow velocities, less heat is transferred into the coolant.

In most battery packs, maximum temperature variation is limited to 3 °K along the direction of the flow stream. The experimental model easily met the 3 °K limit and could effectively cool the pack even at low-flow velocities.

Materials such as graphene are used in compact TMS, which is a novel but expensive material. The results in figure 2 show the temperature rise in the battery pack using the experimental TMS are on the same order as those reported in research literature that used graphene as a phase change material (PCM) based thermal management system. Although such PCM-based TMS are compact, this new TMS does not require use of such novel materials and can therefore be produced at lower cost.

By using the CFD-based TMS functional model created with Simcenter STAR-CCM+ and Simcenter Battery Design Studio, the results of simulations and experimental measurements were in agreement, validating the model against the experiment with greater than 90 percent accuracy. Representative battery packs constructed using the symmetry of the total pack were successfully simulated, together with the TMS, to lower the computational cost.

Since the TMS worked effectively and safely under stringent conditions, it is a suitable candidate for large Li-ion battery packs that are used in electric vehicles.